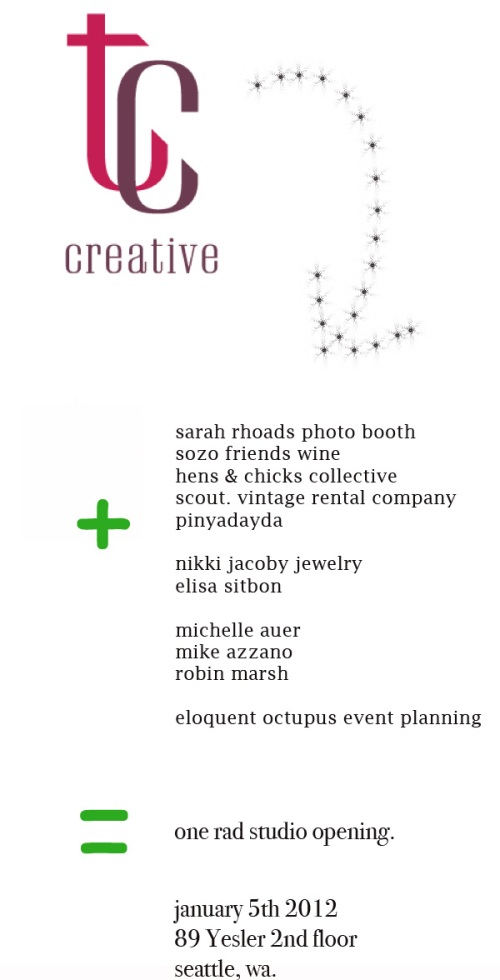 On January 5th I have the pleasure of participating in what is sure to be one amazingly inspiring night. Tiffany Lowry of Tiffany Colors is opening an adorable art studio space in the Pioneer Square area and she’s asked me to provide some pieces from my scout. collection to the opening!

If you’ve never heard of Tiffany, woah. She is only one of the most talented makeup artists and stylists in the Seattle area and her studio is sure to offer Seattle Creatives a unique space to get their create on!

Come spend the evening with us, while we sip wine, give back, look at some kick-ass art and take photos with Sarah Rhoads Photography.

You don’t wanna miss it!

I remember him asking: “what are we supposed to do?”

I responded, hands on hips: “what do you mean, what are you supposed to do?”

And then we stood there. For a long while. Totally dumbfounded. Because minus the stereotypical impressions of bachelor parties only consisting of 18 rounds of golf and minimally clad women, I had ZERO clue of what he was supposed to do…zero.

And there are stories. Endless ones. About best friends. Best Men. Brothers. Sisters. Bridesmaids. Uncles. Cousins. All under the pressure to create a night full of pure awesomeness. That “last night” out for the bride or groom to be. We plan and plan with the hopes of living up to the couples expectations, all the while hoping to provide a night of endless entertainment, as to not disappoint a huge group of people – half of which we have never even met.

Road Dogs Seattle Brewery Tour is this totally brilliant and super informative 3 hour drink fest. Imagine it: you don’t drive. You don’t even plan. You just hop in a big white utility van with a dude named Dustin & 9 of your best buds, crank up the jams and drink beer. And lots of it. Oh and you learn lots of cool facts too. Facts that can obviously be used as ammunition on those future trivia nights.

Oh and this tour isn’t just for dudes. No. No. No. Gals too! I had sooooo much fun this past Tuesday when I was invited out on the brewery tour by kimberly. I made some new industry pals, sipped on citrus beer (YUM!), stopped to say hi to the troll and learned that the “bung” goes in the bung hole. (Okay, that sounds really bad, but I learned that the bung is this hole on the side of a keg that can be opened so you can add yummy flavors to the beer without having to flavor an entire batch. For example, Don of Naked City Brewery added Sour Patch Kids to a keg at a recent beer festival and it was a HUGE hit!).

So next time your wracking your brain while planning those bachelor/bachelorette parties, 21st birthday shenanigans, wedding anniversaries, etc. etc. check out Road Dogs.

shop til you drop!

I’m so excited to announce that 100 Layer Cake (only one of the most gorgeous wedding blogs out there!) started a new shopping extravaganza today called the: pop-up shop (how cute is that!) where they highlight one wedding related company and put gobs of their gorgeous items on sale….just for YOU!

So for you brides out there searching for the perfect accessory for that walk down the aisle (or even just you gals who like me adore pretty little details)
…GET OVER TO THIS SALE!

P.S. If you need a little encouragement in the right direction, I just bought one of their peach colored pom poms…I couldn’t resist!